The Cemetery at Lewinsville has provided the final resting place for Lewinsville members as well as other local citizens for more than 160 years. The present grounds of the Cemetery were used for burials as early as 1838, although the Lewinsville Presbyterian Church was not established at the site until October 17, 1846. Retaining its character as a simple country church cemetery throughout these years, it is peaceful and unpretentious, and possesses a quiet natural beauty that inspires reverence and meditation.

The land for the church as well as the cemetery was donated in the late 1840’s by the family of Dr. 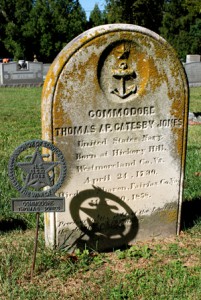 Mottram Ball, one of the early settlers of the community, to a Trust headed by Commodore Thomas ap Catesby Jones, who is generally considered the actual founder of the church. Jones, who enjoyed a distinguished if controversial career in the US Navy, was the church’s first trustee. One of the oldest graves is that of Rev. William Maffitt, a prominent clergyman who began meeting with a small group of parishioners at his home, “Salona,” in 1812. Mr. Maffitt was one of the ministers who presided at the funeral of George Washington. His “Salona” congregation of 17 members was the forerunner of the Lewinsville Presbyterian Chuch congregation. Mr. Maffitt died in 1828, so though he was our congregation’s first pastor, he did not live to see the church actually built. Commodore Jones and Mr. Maffitt are buried not far from each other in the cemetery.

Thanks to the work of JJ Foster for his Eagle Scout Project in 2015, Lewinsville’s cemetery is now available on the “Find a Grave” website.  Each headstone was photographed and can be found on the Find a Grave website along with biographical information, if available.  Interment information is also available.  The site allows the user to search the Lewinsville Cemetery by deceased’s name.  CLICK HERE TO GO TO LEWINSVILLE’S CEMETERY ON FINDAGRAVE.COM

Of the 1,415 burial sites in the cemetery, only 53 are currently available, and they are restricted for purchase by members of Lewinsville Presbyterian Church. Exceptions can be made for non-members with close ties to family already buried in the cemetery. Burial rights to these sites are available for $3,000 each plus $500 perpetual care.

In recent years, a portion of the cemetery was set aside for the interment of cremated remains. There are 222 such sites currently available to members of Lewinsville Presbyterian Church. Burial rights to these sites can be purchased for $700 each.

The cemetery was recently given 16 standard-size burial sites in the National Memorial Garden cemetery. These sites are available at discount to Lewinsvlle members and non-members.

For more information about the cemetery, inquiries should be directed to the Lewinsville Church Office- 703-356-7200.